You have no items in your shopping cart.
Malay   English   Chinese
Menu

KUALA LUMPUR (17/02/2017):  A physical education teacher at a primary school was sentenced to a total of 24 years in jail and 12 strokes of the rotan by the Sessions Court in Selayang, here, for two counts of raping a pupil.

Judge Tasnim Abu Bakar handed down the decision after the defence failed to prove reasonable doubt in the case against Mohd Ezlie Azram Mohammad Khasasi, 38.

She jailed Mohd Ezlie Azram for 12 years and ordered the accused to be whipped six times for raping the girl when she was 11 years old at his house in Batu Caves, here, between 1pm and 3pm on Dec 3, 2011.

She sentenced the accused to another 12 years' jail and six strokes of the rotan for raping the girl again when she was 13 years old in mid-August 2013 at the same place.

The judge ordered the sentences against the Mohd Ezlie Azram, who was charged under Section 376(1) of the Penal Code, to run consecutively from Friday.

Earlier, in mitigation, Mohd Ezlie Azram's counsel Dony Abdullah, who was assisted by Farhan Read, said his client was 38 years old and was a divorcee with two children, aged nine and 10.

Dony said the accused was the eldest of seven siblings and has to support two siblings who are college students.

DPP Wan Shuhaida Wan Omar urged the court to mete out a harsher sentence against the accused.

She said that as a teacher, the accused should protect the victim and should not take advantage of the girl.

Retrieved from The Star Online

"After escaping in a Proton Iswara, they were nabbed after police raided a house located a few kilometres away from the convenience store at 4.30pm on the same day," said ACP Sum.

"They took away RM446 in cash and eight boxes of cigarettes. We also seized seven parangs, two handphones and the Proton Iswara they used to stage their escape during the robbery," he said.

ACP Sum added that the group - aged between 16 and 26 years old - were rookies with no criminal record.

He also said that the police detained two other men on the same day, adding that the two men were actively breaking into vehicles and stealing valuables along Jalan Laxamana here.

"The suspects have been active for two years around Ipoh, and we have found five more similar cases linked to them during our investigations," said ACP Sum.

Retrieved from The Star Online 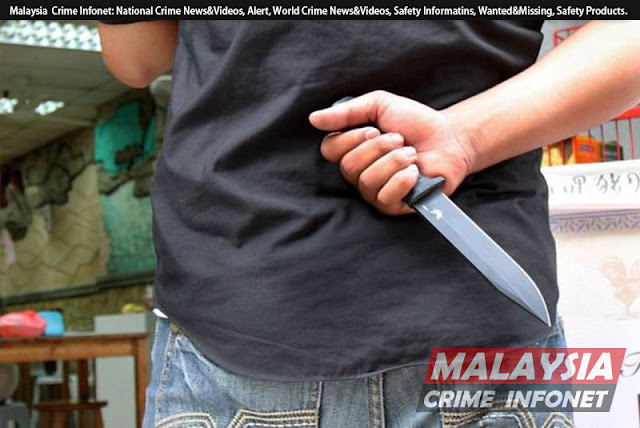 GOMBAK (27/12/2016): A police constable was stabbed in a scuffle with a man he mistook as a waiter while ordering roti canai at a restaurant at Selayang Point Condominium on Monday.
In the 5.40am incident, the 26-year-old constable, who is attached to Bukit Aman Special Action Unit (UTK), had gone to the restaurant with three friends.
He ordered roti canai from a man whom he thought was a restaurant staff.
The man ignored the order and as he was leaving the restaurant with his friends, made a hand gesture at the constable.
Gombak OCPD Asst Comm Ali Ahmad said the constable went after the man, and both fought at the lobby area of the condominium.
ACP Ali said the constable was stabbed in the stomach while the man suffered light injuries.
He said two men, aged 24, have been arrested to assist in the case.
The constable, formerly attached to the Selayang police station, was sent to the Selayang Hospital for treatment in stable condition.
The case is being investigated for causing hurt.
Retrieved from The Star Online
Comments (0) details
A woman was kissed and hugged by a group of youths -Saturday, December 24, 2016

A group of youths robbed while also kissed and hugged a woman outside a lift at an apartment block in Bukit Jambul, George Town. At about 10.35pm, the victim walked out of the lift on Thursday on the 28th floor when the three youths accosted her.

One of the youths took her handbag containing RM40, a handphone and some shopping vouchers, while another kissed and hugged her.

The youths were arrested the next day and a fourth suspect was picked up by the police for having bought the woman’s handphone from them.They returned the handbag to the woman after she begged them.

The youths were arrested at about 6.30pm in Sungai Nibong and Gelugor, who aged between 16 and 20, said George Town OCPD Asst. Comm. Mior Faridalathrash Wahid.

“All the youths are no longer schooling” he said, adding that the three youths had admitted to robbing and molesting the woman.


The suspects have been remanded for investigrations into gang robbery and the use of criminal force on a person with the intent to outrage modesty.

Get a pepper spray or a personal alarm today at www.whiteeastern.com to protect yourself when you're alone!

Comments (0) details
Old woman was dragged on the road during an attempted snatch theft -Friday, December 23, 2016

76 year old woman was dragged on the road for 15 metres during an attempted #snatchtheft!!

Comments (0) details
Bouncer charged with murder of college student in Sabah -Friday, December 23, 2016
KOTA KINABALU (23/12/2016): A 28-year- old pub bouncer has been charged with the murder of college student Yaacob Nasran.
The accused, Mohd Azmin Lidin, was charged under Section 302 of Penal Code before Magistrate Jessica Ambou Kakayuh.
No plea was recorded.
He was accused of killing Yaacob outside the Mee Siam Thai Bar between 3.30am and 4.30am on Dec 15.
Police prosecutor Insp P. Nathan led the prosecution while Azmin was represented by lawyer Rakhbir Singh.

The offence under the Code is not bailable and carries the mandatory death sentence if the accused is found guilty.
Magistrate Kakayun fixed Feb 7 for next mention of the case.
Five other suspects involved in the killing of Yaacob are still in remand.
A few relatives of of Azmin were seen at the court house when he was brought to court early Friday.
Retrieved from The Star Online
Comments (0) details
Datuk seriously injured in Ipoh robbery attempt -Friday, December 23, 2016 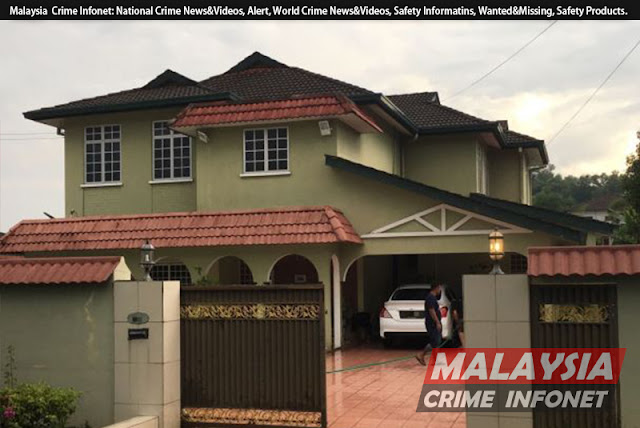 IPOH (23/12/2016): A man with a "Datuk" title was seriously injured when he was slashed during a robbery attempt at his home in Meru Heights here Thursday.
It is learned that the victim is in critical condition at the Raja Permaisuri Bainun Hospital.
The man's daughter, who declined to be named, said she and her parents were about to go out and that the main gate was open when the incident occurred.
She said she went back inside to get something, and that's when six parang-wielding men on motorcycles entered the porch.
"They slashed my father on the head, and when I tried to close the door to the house, they ran after me and managed to enter.

"In the house they slashed my mother on the hand, and kept asking for money and gold.
"However, because of our screams, they fled with our car and house keys," she added.
A neighbour, who also declined to be named, said it had just started to rain at about 3.30pm when he heard people screaming.
He and his wife quickly came out of their house, and when they looked over the wall, they saw six men slashing the victim on the head next to his car.
"I quickly called police, who arrived in less than 10 minutes."
Retrieved from The Star Online
Comments (0) details
Foreigner held for allegedly molesting five-year-old in barber shop -Thursday, December 22, 2016

Kota Tinggi Police chief Supt Rahmat Othman confirmed receiving a report from the victim's mother at 12.50am on Monday.
He said in a statement that the child had been left by the mother with two foreign nationals who worked as barbers at her shop in Jalan Heng Seng, Sungai Rengit, Kota Tinggi, here, at about 3pm.
Rahmat said her husband arrived at the shop half an hour later and found the child with one his employees in a locked room.
Following the incident, the parents took the child to a clinic and the doctor said the child could have been molested and suggested they see a specialist.
Rahmat said police later arrested a 30-year-old Bangladeshi man who worked as a barber. "The suspect has been remanded for 14 days," he said, adding that the man did not have travel documents.
The child has been referred to a specialist at the Sultan Ismail Hospital. -- BERNAMA
Retrieved from New Straits Time Online
Comments (0) details
Terengganu businessman' home ransacked one hour after he left for Kelantan -Thursday, December 22, 2016

BESUT (22/12/2016): A 54-year-old businessman from Kampung Pengkalan Nyireh here lost RM83,000 worth of belongings, including a pick-up truck after his house was broken into on Monday.

District police chief Superintendent Mohd Zamri Mohd Rowi said the incident happened about one hour after the victim, Mohamad Zaki Husin and his wife, left for a business trip in Kelantan.
Zamri said a neighbour called up Zaki at 3pm, more than one hour after the couple left the house, saying that he saw a man drove off with the victim's Ford Ranger.
"Since the neighbour did not recognise the driver, he decided to contact Zaki to confirm," he said. Zamri said the victim then turned back and arrived home at 5pm, only to find his pick-up truck gone and house in shamble.
In his report, Zamri said the victim claimed the thief had forced open the main door before ransacking the house.
"Among other item's stolen included car keys, a pair of shoes, office keys and a laptop. All the missing items are estimated at RM83,000," he said.
Zamri said the victim lodged a report at Kampung Raja police station and the case was being investigated under Section 457 and Section 379A of the Penal Code for house break-in and vehicle theft.
Retrieved from New Straits Time Online
Comments (0) details
Newsletter
Wait...